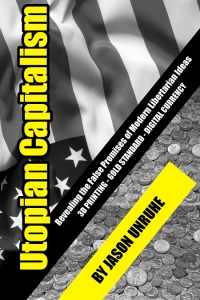 I thought I’d give everyone a quick up date as to what has been going on. A few weeks ago I began working on another book. Those of you who regularly check the book store section have already seen the prototype cover for it. The book will be titled “Utopian Capitalism: Revealing the False Promises of Modern Anarcho-Capitalist Ideas”. This work is proving to be a much larger undertaking than I originally anticipated. Due to time and energy constraints I abandoned the project of writing a full reply to Larken Rose’s awful book “The Most Dangerous Superstition”. His book was full of non-sequiturs, falsely attributing particular phenomena to the state, and was just plain dishonest. He claims that authority is illegitimate and doesn’t exist, yet he defines authority to only mean the state. He goes so far as to claim that the Church has never been an authority because it has never had the means to force anyone to do anything, nor has it ever had the supposedly been seen as having a perceived right to gives orders. Apparently Rose has simply never heard of a theocracy, nor remembers the early founding of America. But I digress; I wrapped up an eBook detailing the logical flaws and outright insanities of his work. Suffice to say there are more important things to work on.

Because we live in a time (and First World place) where we are constantly bombarded with “that’s not real capitalism”, and then offered utopian solutions, I thought I’d take them on. Too often we have the an-cap or libertarian crowd making all kinds of grandiose claims about what capitalism really is if only the state would get out of its way. After a long enough period of time of making clams with literally nothing to back it up, they’ve created (sometimes resorted to) creating new means of production and exchange with the express purpose of undermining the modern “not real capitalist” state. Most of these methods of economic activity are actually quite creative. Manufacturing is replaced with 3D Printing, government issued fiat currency is replaced with either a return to gold or by switching to a digital currency alternative. While these are innovative, they eventually lead to utopianist claims. Often they create outright claims of utopian societies. Browse Reddit and you’ll find libertarians or an-caps who consider just moving out into the middle of the woods with 3D printers and alterative currencies just to say f*** the government. This qusai-proposed alternative society is completely utopian in character. They have all the claims of a better society with no understanding of how to make them work.

This book I’m working on right now is an investigation into these utopian claims, to see how they really work and what they would really lead to. I’ve compiled a few of them for analysis. Allow me to quickly layout the book.

The book is coming out much larger than I had anticipated. The digital currency section I’m working on right now appears as though it is going to be 3x the size I was planning, if I’m going to fit all that I wanted to in discussing it. I haven’t even started the 3D printing section yet, but I can already tell it’s going to be much larger as well. I try as hard as I can to get as much done as possible my current situation. When there is significant progress made in its development I will provide another other update.

Right now I can say that the gold section is complete.