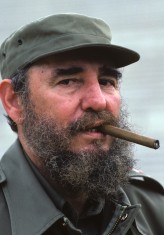 The road to peace has been laid between Cuba and the United States. Anyone who isn’t caught up in dogmatic thinking recognises that this will be the death of the Revolution. As this alteration in the relations between Cuba and the U.S. took place, the big mean himself, El Jefe, was conspicuously silent. if there was anyone’s opinion people wanted, it was Fidel Castro’s.

Recently he broke his silence on the matter and decided to speak publicly. He laid out his thoughts in a letter addressed to the student federation at the University of Havana and printed in the Communist Party newspaper Granma.

“I don’t trust the policy of the United States, nor have I exchanged a word with them, but this does not mean I reject a pacific solution to the conflicts.”

“We will always defend co-operation and friendship with all the people of the world, including with our political adversaries. Defending peace is the duty of everyone. Any peaceful or negotiated solution to the problems between the United States and the peoples or any people of Latin America that doesn’t imply force or the use of force should be treated in accordance with international norms and principles.”

“The serious dangers that threaten humanity today should give way to rules that are compatible with human dignity. No country is excluded from such rights. With this spirit I have fought and will continue fighting until my last breath.”

“The president of Cuba has taken the appropriate steps in agreement with the prerogatives and powers granted him by the National Assembly and Communist Party of Cuba”.1

These words certainly make it clear that he does not trust the United States or its intentions, nor should he. But the other words he speaks contradict that. He has clearly given the all clear for Raul to go ahead and forge relations with the US that will outright harm Cuba. The biggest threat is the U.S. desire to invest in Cuba which has been accepted by Raul. The intention is to buy up land and capital. This alone will spell the death of Revolutionary Cuba. Once this kind of authority is in the hands of the imperialists the country will have no ability to resist U.S. power.

Marx spoke quite clearly that which gave the bourgeoisie its power, their class position was their ownership of the means of production. This is what the U.S. completely intends to get into their grasp. Raul seems intent upon allowing them to do so, perhaps with some kind of restrictions. What Raul is doing is playing the imperialists game, they can come in, but he’ll keep an eye on them to make sure they don’t get out of control.

Unfortunately for Cuba that is not how it works. All they need is to get their hands on enough capital to control the economy, enough of the wages of the population as well. We know the first thing the imperialists are going for is a cheap source labour to suppress the falling rate of profit as labour costs in China continue to increase. As long as capitalism and socialism coexist, whoever owns the capital has the power. Is it going to be the proletarian state, or is it going to be the foreign capitalist investors?

Many people might think to ask what the difference is between this and Special Economic Zones (SEZs), particularly those employed by the DPRK and in some cases (not all2) in China. In the case of SEZs the capital (machines labour etc.) is not owned by the foreign firm. A domestic, or even state company does and allows the foreign firm to direct their use, organize them in a particular way to create the commodities desired, but they cannot own them, they cannot exercise a dictatorship over them. They have no legal to claim them. The means of production can always be seized away and put to another use. The foreign firm owns the product of labour, not the productive capital itself. Such a capitalist may take these commodities and send them away for profits, but they do not control the productive power itself. There are even measures that can be taken to negate imperialist rent3, but they are beyond the scope of this video. Even SEZs come with their own risks when dealing with the imperialists, but they are likely a relatively safe compromise.

This is not exactly new. The Cuban revolution has gone off course for a long time. They have been opening themselves up to foreign capital for quite a while. First, it was the Soviet Union, then France and other Europeans when the Soviet Union fell, now it will be the USA once relations thaw.

Castro predicted this very thing happening as he had seen it in other leaders before him. Khrushchev became revisionist when he declared his intentions for peaceful co-existence with the capitalist powers, the same is true of Mao in the 1970s. He himself has fallen to this very same phenomenon.

Fidel Castro on the Cultural Revolution:

“If we are going to argue basically, we must tell some basic truths and we must unmask everything that is of fascist type hidden under Marxist emblems. Of course this story of revolutionaries, who in spite of having done good things in their lives have committed great barbarities later at the end of their lives, is not new. During the past days we have seen with sorrow the things that men are capable of doing when they degenerate.

Essentially what Castro is saying is that Mao was revisionist as he got old. This was indeed true, but not during the Cultural Revolution, it did happen in the 1970s most notably with the 3 World’s Theory (not to be confused with Third Worldism). When Stalin got old he slipped too and so did Enver Hoxha. It’s something that happens to revolutionaries when they get older. Revolution continues under younger generation of people with fresh new enthusiasm.

Later Fidel Castro would deny that this phenomenon of revolutionaries getting old applied to him. We can clearly see that this is not true.

2. Not all SEZs work the same way. Some allow the foreign capitalist to own the means of production, some do not. Some are owned by the state and some are owned by a private company as it is in most cases in China.

3. Oakland to Havana: The Local Negation of Native Bourgeois, and the National Negation of Imperialism, Weekly Bolshevik
https://www.youtube.com/watch?v=TTElScnd1Qo