A few days ago we had May Day, the international day of labour and labour resistance. It commemorates all the of hero struggles radial workers have taken to improve their lives and resist exploitation. The history of the day is rich with magnificent feats and well earned victories. It is remained a positive symbol under socialism, the highest form of worker’s power yet expressed. In all the great socialist countries May Day has been a celebration of the power of workers to overcome their oppressors. Historically it is a magnificent day. 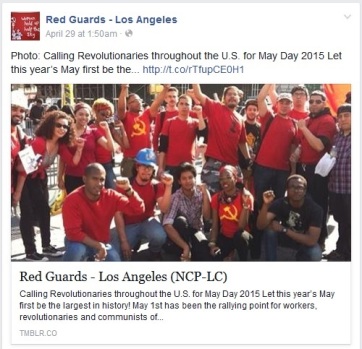 Not revolutionaries, a handful of protesters

Unfortunately today, that meaning is dead in our society, it has been reduced to an empty secular ritual. The day has lost meaning in the First World as the so-called working class parades around acting like they’re carrying out revolution, not honouring those who have sacrificed in the past. The day has been reduced to petty posturing as First Worldist groups running around with banners declaring themselves the revolutionaries of the modern age. Boys with red flags gather together and demand even more than their already inflated global share of wealth. As they do so they arrogantly proclaim themselves the new vanguard of global revolution. A bunch of privileged White college kids who very often have never even had a job.

That’s the problem, they don’t know what revolution is. First Worldists are quick to say that they are doing it, but they’re not. The vast overwhelming majority consider merely protesting to be revolution itself, thus justifying calling themselves revolutionaries. They march proudly in groups of eight screaming proletarian slogans as if they were matching off to war.

They all take pictures and post them all over Facebook declaring themselves to have done something great when they haven’t. In their minds this is a time to shine, to put it out there while the rest of the year and the rest of the time they do nothing revolutionary. May Day is supposed to be celebration of a day of action, they’re not celebrating that, they’re going out and cosplaying revolution. This is how they bolster themselves up and morally justify the fact they don’t do revolution. They’re just doing a little cosplay for a day like an anime convention. They live this fantasy for a few hours then they go back to their completely unrevoutionary acts, theory, and lives. They make a mockery of those who are actually out there fighting for workers rights. They mock those who are putting their lives on the line so that they can feed their families. The only people these cosplayers celebrate are themselves and their own egos. 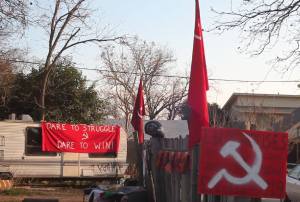 No, this is not a guerrilla base camp

In the proper jargon this is called is called movementism. It’s a very common phenomenon in the First World. People who are out to look like they’re doing something without actually doing something. They’re out for the image of an activist, but really they’re just jumping on the bandwagon of whatever they think is the popular trend. They’re not serious in their half-hearted activism, they’re out to celebrate their phony self-image that makes them look and feel like they’re doing something magnificent. We see plainly that this is a form of egoism, a form of self-congratulation. A way of boosting themselves up in the eyes of others for their own self satisfaction, not for achieving the goal of the movement. (Assuming that the particular movement even exists; often it’s a figment of the activist’s minds.)

Needless to say such activity is dangerous to those genuinely seeking change, even if it is not outright revolution. When people who are not serious about making change, only interested in boosting their own self-important image, they detract from those trying to do real work. We could look at it as a kind of passive wrecking activity. Often such people; try to get into leadership positions, attempting to take control a real movement which may exist. We see this commonly with privileged White collage activists who usually come from very wealthy backgrounds. As a result of this they try to falsely portray themselves as radical as possible in order to try and shed the gloss of their privileged lives and rich parents. They have to try extra hard to look like they’re one of the community when really they live lives of excess from their wealthy families. They are fakes who threaten to destabilize and wreck real movements and the oppressed all because of their own inflated egos. 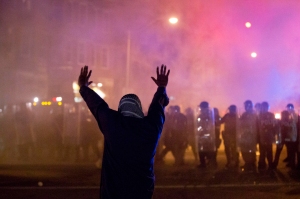 All of this is a disservice and an insult to those who genuinely struggle for emancipation. Despite the sever lack of revolutionary potential in the First World, there are people who are oppressed and struggle against it. Baltimore is a prime example of people who are rebelling against real oppression. The Black population in Baltimore face life imprisonment and possible death for daring to challenge the system that is literally killing them. I don’t mean some petty flag waving, I mean actual violence against the police. There are people who are really oppressed in the First World and run the risk of dying because of it. Such people should be commended for the risks they take to challenge a system that literally murders them. A bunch of White collage kids from wealthy families waving flags in their own names are absolutely incomparable to the Blacks in Baltimore rebelling against police murder and oppression. When such people dare to claim they are the leading force in resistance of oppression they don’t’ suffer, but in fact benefit from, they insult those whose lives are threatened by the system. Protesting against police repression right now Baltimore can get you killed or imprisoned for life. No privileged White collage kid should dare to compare themselves, say they speak for, lead, or claim to be oppressed as they are. May Day is supposed to be a celebration and remembrance of those who have risked their lives to fight real oppression.

When handed a criticism such as the one I’ve given they answer with the following: “Yea, well, what have you done? ” I answer telling them that I didn’t pretend to be doing revolution. I didn’t pretend to be a part of the exploited classes. I didn’t go out in public dressed up like a revolutionary pretending to be tacking the system which I massively benefit from. I didn’t march around cosplaying revolution while being from a rich family. I didn’t fake anything. I spent time thinking about those who came before me that actually suffered. I did what I always do, what I’ve done for nearly six and a half years. I made videos and blog posts trying to get the right revolutionary information and perspective to the public. I try to be the media that is needed to combat the bourgeois propaganda machine. I’ve done the best that I can, without the need for self-aggrandisement, or faking being a part of the oppressed masses. I’ve never passively sabotaged those who genuinely suffer and struggle.

The reason I say this is because we have to admit that this is not revolution. These First Worldists need to be reminded that they are not doing revolution. They are protesting. If we took them at their word it would seem like they’re celebrating their heroic actions that never took place. There are those who are really struggling right now, there are those being killed in the streets of Baltimore and all around the Third World. These cosplayers who get together once a year to pretend revolution are an insult to those who do fight.

13 thoughts on “May Day Cosplay”