A good deal of the bourgeoisie, left and right, have begun talking about protectionism again. Most well known is of course Donald Trump who has been invoking images of 1950’s America when the father could support his whole family on a single income.[1] This has also begun to appear in Australia with the Labour Party.[2] We colloquially refer to this as the “golden age” of capitalism. A party advocating for it usually does so by blaming immigrants for low wages, the corresponding increase in poverty, and other social ills. Again we return to Donald Trump as a prime example. Here is what his website says is his official stance on immigration reform:

“The influx of foreign workers holds down salaries, keeps unemployment high, and makes it difficult for poor and working class Americans – including immigrants themselves and their children – to earn a middle class wage. Nearly half of all immigrants and their US-born children currently live in or near poverty,[3] including more than 60 percent of Hispanic immigrants. Every year, we voluntarily admit another 2 million new immigrants, guest workers, refugees, and dependents, growing our existing all-time historic record population of 42 million immigrants. We need to control the admission of new low-earning workers in order to: help wages grow, get teenagers back to work, aid minorities’ rise into the middle class, help schools and communities falling behind, and to ensure our immigrant members of the national family become part of the American dream.”[4]

There is some evidence to suggest that immigration has had a negative effect on wages. Mostly it occurs in low skill employment. The inflation of the labour supply for these jobs obviously lowers the cost via the simple principle of supply and demand. However one cannot simply blame this as the cause of the destruction of higher paying middle class jobs. These jobs were sent overseas to areas with a lower cost of labour, most notably the Third World. The problem is that this phenomena is seen by its opponents as something malicious that the capitalist class has done, simply to increase profits. This view does not tell the whole story. The truth is that these had to be moved overseas as a part of the ongoing struggle capitalism has with the falling rate of profit. 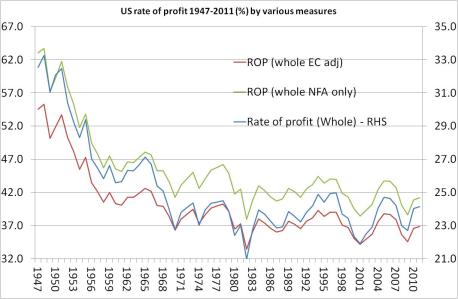 We can see quite clearly that there has been a decrease in the rate of profit for American companies since at least 1947. We can also clearly see that there is a profit cycle as well. Profits were high leaving World War Two because the global completion had been bombed into the ground. As the global industrial powers recovered, the competition began to affect profitability. Crisis continued into the 1960s where it levelled off a bit. Global trade and the destructive policies of the Vietnam War eventually took their effect. Crisis had hit a new low during the beginning of the 1980s. This was combated by Ronald Regan and what is known as neo-liberalism. Most notable being the dismantling of American unions. Although it saved America from further crisis, it was never able to bring profitability back up to where it was in the 1960s. This neo-liberalism ended in the late 1990s, but was given a reprieve in the early 2000s via credit boom. This credit boom would go on to have a substantial part to play in the Great Recession of 2008.

So what is the significance of this? According to Trump and other advocates of protectionism, jobs were exported so that the capitalist class could simply make more money. The criticism here is that they placed their profits ahead of their patriotism. Essentially they’re accusing the bourgeoisie of not being patriotic bourgeoisie, or, defending the national economic interest. The problem with their position is that these capitalists don’t ship jobs overseas because they want to make more money. They have to move them in order to stave off the falling rate of profit. This was not something they chose to do, it was a necessity.

This is the primary reason why the jobs cannot simply be shipped back. The low cost of labour and management of said labour would increase exponentially. This would cut into rates of profit in a very significant way, reducing them. Sure the capitalist can increase the cost of the commodity, but not significantly enough to offset the increase in wage costs. Even if the price was increased it would produce a decrease in the affordability of the commodity. Simply shipping jobs back to the U.S. is not an option. It would have a devastating effect on those companies and the economy.

There’s also other problems that would arise if we simply forced jobs back to the First World via protectionism. If say tariffs were placed on textiles, there would be multiple effects. First there would be shortages as the necessary productive capacity in the First World isn’t available. All machinery, and places of production would have to be built first. During that gap there would be a significant increase in the cost of textiles (via supply and demand) leading to inflation as supply dwindled along with the added cost of tariffs. Even afterward, when the productive capacity was in place, the increased cost of the product would cause inflation in this regard further.

When inflation hits this area of commodities, we have an increase in the cost of the minimum reproduction of the worker. It’s even more significant when we see that this wouldn’t increase the wages of First World people, they would stay at a minimum along with the increased cost of commodities. Meaning, the day-to-day living expenses of working class people would increase leading to a political backlash against whomever enacted the policy.

If tariffs were suddenly placed, there would be a tremendous decrease in investment in the Third, even Second World. This would have severe repercussions as the sudden loss in employment would affect the disinvested state’s ability to collect tax revenues. Wide spread unemployment would certainly breed political instability. While this would increase the potential for revolution, it would be devastating for capitalism itself.

Interestingly, the necessary investment to make up for the loss left by the US would be picked up by Russia, China, or Japan. This would increase their influence in the world, and would provide a boost to their budding empires. Essentially U.S. imperialism would decline as other global powers swooped in to take their place. Given the right circumstances, however unlikely, it could stimulate an inter-imperialist conflict as these powers competed for their investment potential.

The patriotic bourgeois protectionist stance is intended to save capitalism from its own contradictions, and inherent instability. There would be nothing positive for the capitalist class anywhere if this were to take place. There is no magic wand that will simply save the current capitalist system from itself. Trump and others it seems, are disconnected from an appropriate knowledge of economics. His plan would essentially cause harm to a wide range of people. This harm would likely cause a great increase in revolutionary potential across the board. With that in mind… do it.

[1] Why Trump’s protectionist ways will hurt the economy, CNBC
http://www.cnbc.com/2015/08/26/why-trumps-protectionist-ways-will-hurt-the-economy-commentary.html

[3] Center for Immigration Studies, Immigrants in the United States: A Profile of America’s Foreign-Born Population
http://cis.org/node/3876

3 thoughts on “Why Protectionism Won’t Work This Time”