associate with each other. However, once a year for the last decade or so, they all gather together in front of the United Nations during its General Assembly to display their insanity to the world by calling for greater hostility between the United States and the Islamic Republic of Iran.

Already on September 21, some of the early arrivals were out in front of the United Nations. With sandwich boards and like carnival barkers, a few blocks down from where the Lyndon LaRouche movement was set up, a group of elderly, agitated Persians tried to pass themselves off as “Human Rights Activists.”

All it takes is a little bit of research to discover that the psychologically disturbed protesters in bright yellow shirts with “No to Rouhani” on them are members of the Mujahideen-e-Khalq (People’s Holy Warriors). This is a violent cult whose members claim to be “Islamic Marxists” while they openly collaborate with Israel’s Mossad and the US Central Intelligence Agency.[1] 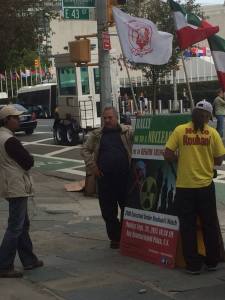 Led by Massoud and Maryam Rajavi, this group of fanatics has killed at least tens of thousands of innocent people since the Iranian revolution of 1979. When the group discovered that it would not win out in the aftermath of the Islamic Revolution, it went on a killing spree, bombing meetings of the Iranian parliament and assassinating elected officials throughout the country.

During the Iraq-Iran, war the Mujahideen-e-Khalq (MEK) befriended Iraqi dictator Saddam Hussein. Hussein’s forces air-dropped bands of MEK fighters into Iran where, as the self-named “Iranian National Liberation Army,” they slaughtered entire villages. After the Iraq-Iran war, the MEK set up shop in Iraq where Saddam Hussein utilized them as his personal goon squad, sending them out to slaughter Kurdish villages.

In the 1990s the group officially ordered all of its members to divorce their spouses, as marriage was considered to be a distraction from the goal of overthrowing the Iranian government. The group has long departed from the foundations of the Islamic faith. MEK cadre now consider its founder Massoud Rajavi to be a prophet — at once existing on the same spiritual level as Mohammed and Christ while offering more revolutionary brilliance than Karl Marx and Vladimir Lenin. (US extremist Reverend Jim Jones of the People’s Temple, whose followers committed mass suicide in Guyana, had a similar claim, describing himself as the combined reincarnation of Jesus and Lenin.)

Masoud Rajavi hasn’t been heard from since the US invasion of Iraq in 2003, but his spouse, Maryam Rajavi, is now the public face of the organization. From exile in France, Rajavi declares herself the president of Iran, even though virtually everyone in Iran considers her a traitor and mass murderer for her atrocities during the Iraq-Iran war.

Though it doesn’t make any real political sense, the Rajavi cult has fallen into favor among the Likud Party of Netanyahu and the Republican Party of Jeb Bush. MEK and the Mossad carried out joint operations assassinating nuclear scientists in Iran. As Secretary of State, Hillary Clinton officially legalized the Mujahadeen-e-Khalq in 2013, despite its record of killing Americans and routinely torturing and arbitrarily executing people inside its camps.[2]

Another regular of the annual anti-Iran song-and-dance extravaganza outside the United Nations is New York State Assembly member Dov Hikind. Hikind openly brags that he was once a member of the Jewish Defense League.[3]

The Jewish Defense League originated as a group of anti-Black racists who wanted to prevent African-Americans from moving into heavily Jewish neighborhoods in Brooklyn and Queens. When there was widespread criticism of Israel during the 1967 war, the group suddenly developed an interest in international politics and began attacking Israel’s opponents. Throughout the 1970s and 80s, the JDL carried out a string of bombings and assassinations. The Black Panther Party, Jews who criticized Israel and the organized political left were among its primary targets.

Though the JDL frequently invoked the holocaust to justify its terrorism, in the 1980s the group decided to focus its attacks on the country which defeated Nazi Germany and liberated most of the concentration camps. When the Soviet orchestra performed in New York City, JDL bombed the theaters. Soviet diplomats at the United Nations frequently found themselves dodging JDL attacks as they tried to negotiate and prevent nuclear war.

Dov Hikind, now a kingmaker among Orthodox Jews in the Democratic Party, admits he was one of the rank-and-file who bowed at the feet of Rabbi Meir Kahane and carried out his orders as a member of what is widely recognized to have been a terrorist organization.

In more recent times, Hikind has focused more on trying to ban books from Brooklyn’s public libraries[4] and dressing in racist blackface costumes for Purim celebrations[5] than on bombing or shooting people with whom he politically disagrees. He still proclaims he has “no regrets” about joining a violent organization that even the Israeli government has outlawed.

Hikind recently got intentionally arrested outside the office of Chuck Schumer in a demonstration against the P5+1 Nuclear conclusion. The video shows Hikind, clearly inexperienced when it comes to street protests that don’t involve lead pipes or Molotov cocktails, trying to get a reluctant group of supporters to chant “Chuck, Chuck the Deal” as he positions himself for a planned symbolic arrest.[6] 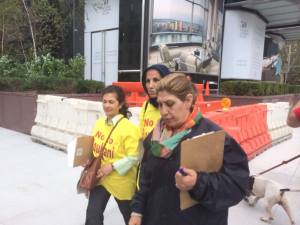 Desperate Rage Against Prospects for Peace

The admitted terrorists Dov Hikind and the Mujahideen-E Khalq will only be sideshows at the upcoming display of insanity outside the UN headquarters. The mainstream of the crowd will be rank-and-file New York Republicans, Donald Trump supporters, and members of the World Zionist Organization. These forces have already made a point of countering the peaceful rallies supporting the nuclear deal at congressional offices in New York.

While having less of a violent history, the small crowds of elderly right-wing New Yorkers protesting the nuclear deal are equally delusional. In response to moveon.org protesters supporting the deal on the Upper East side of Manhattan, elderly Republicans shouted bizarre statements like “Iran is responsible for 9/11,” “Iran is part of ISIS,” and “Osama Bin Laden was an Iranian.”

The knowledge of global politics, history, or even basic geography among this angry, hateful crowd is extremely limited. Their analysis of the Middle East consists of “The Arabs are bad, and they are all in it together, so let’s kill them all.” Many of them do not even realize that Iranians are Persians, not Arabs.

Though their lack of knowledge of anything to do with Islam is very apparent, these FOX news junkies strut around pretending to be experts, beginning each and every hate-filled rant with “I’ve read the Koran.” Almost every New York City workplace has one of these socially awkward, hate-filled Islamophobes. Office managers across the city love the token office Republican; he keeps people hard at work in their cubicles, because when he gets up for a drink no one wants to be anywhere near the watercooler.

George W. Bush’s invasion of Iraq in 2004 depended on such ignorance. Educated people throughout the world would never be convinced that the Iraqi Baath Arab Socialist Party and Al-Qaeda had tag-teamed to bring down the World Trade Center, but the racism and ignorance of certain sectors of the US public can never be underestimated.

The tragic part of this annual hatefest against the Islamic Republic is the double standard. As the UN General Assembly rolls around once again, we can expect the mainstream US press to treat the anti-Iran, pro-war hate circus as a gathering of “responsible Americans” who are “deeply concerned about terrorism.” One or more of the Republican presidential candidates is expected to attend to join the extremist mob outside the United Nations. The double standard is rather blatant. One can only imagine what would be said if President Obama or Bernie Sanders were to address a crowd of unapologetic terrorists and individuals who claim to be “Islamic Marxists.”

As Rouhani continues his call for a “World Against Violence and Extremism” from inside the UN General Assembly hall, the group of violent extremists will be outside screaming louder than ever. However, US public opinion and the sentiments of people all over the world are against them. The tone of this year’s rally is likely to be far more desperate.