Russian Revolutionary leader Vladimir Lenin warned the proletariat of the dangers of identity politics. This warning has remained ignored by First Worldist Marxism. Today we face a time when Marxism in the First World is at its weakest point that it has ever been. American workers (First World in general) have rejected coming over to the side of the communists. As a result of the historical failure of Communists to reach the working class, it has shifted and has sought out a stand-in proletariat. All attempts to do so have failed. Instead, First Worldists have latched onto whatever fringe group they can to champion; groups which are not capable of creating revolution. Often times, they are groups that have rejected them. Black Lives Matter is a prime example of this.

Out of desperation, they have latched themselves onto identity politics. Rather than simply acknowledging the lack of revolutionary potential in the First World, they have instead invented it where it doesn’t exist. Rather than correcting an incorrect political line, they have pandered to particular groups. Groups that aren’t interested in revolution, nor are they interested in radical politics. These groups are collectively known as “identity politics.” They are not based on science, they do not place politics in command, they place identity above all else. First Worldists are directly responsible for this happening.

We have seen what so-called Marxists groups do. On Facebook we can see people trying to come up with new identities to satisfy their alienation. Instead of tackling the problem of alienation, they have fetishised identities near to the point of psychosis. First Worldists have championed these identities to a point where they have lost a connection to the material conditions in which they exist. They see them as outside, or detached from the social context. They choose not to see them in the context of a society which produces alienation, but instead push them as though they were material things themselves.

An observation of their behaviour on social media is quite telling. You can see them fetishise mental illness. People with diagnosed mental illnesses, depression, bipolar, anxiety, autism, are promoted as the illnesses themselves. They are not recognised as people who have a problem which obscures who they are. They are taken as the illness themselves. Their identity becomes not a person who has these issues, but a person who is the issue. Watch them on Facebook actually competing with each other over who has the strongest, or most medications. They compete with each other over who can give the worst example of their symptoms. The Marxists who champion this are constructing new identities instead of doing the political science necessary to forward revolution. They have actually turned people away from each other rather than towards them.

All of this has culminated into the disaster that is Paul “Stefonknee ” Wolscht. This man is the inevitable result of identity politics, and the fettishisation of identity. Wolscht is a 53 year old, 6’2″ 270 pound man, who identifies as a six year old girl. He, also “fluidly moves between her six-year-old self and her adult self, in addition to her male and female identities.” He is a formerly-married father of seven children. This is complete and utter nonsense, someone cannot identify as a child. People are feeding his delusion, his irrational escapism. This person has become the hot topic of discussion around identity.

This person is being touted as a victim of society in a recent web series (video) by thetransgenderproject.com. The video leaves out some serious facts which radically deviate from their narrative of him. In 2009 he was arrested and charged with 14 criminal offenses of assault, uttering threats, criminal harassment, and criminal mischief. His own wife and late-teenage children testified against him. He was convicted of assault and uttering threats. He was also served with a two-year restraining order against him that kept him from him his wife and all seven of his children. Eventually, they ended their marriage over this issue. In the video he claims his wife left him because he was transgender. He did not mention his criminal history in relation to the divorce.

After these events, he moved to Toronto where he began a career as a “transgender activist”. He was given the job of “trans consultant” at The 519 Community Center. Eventually he was removed from the post due to the following behaviour:

This would otherwise seem like a quibbling over her character. When she was employed, however, as a trans consultant for a queer-focussed community centre and assigned to work alongside a few trans women of colour, she had a tendency to hijack client/community presentations and redirect these back toward herself (implying that she was the most oppressed trans person there was). Eventually, this cost Stefonknee her job.”

He has refused any of the normally prescribed treatment. Instead, he opted to take up space in a women’s shelter, and began attending services at the MCC Church. There he took to sharing his story of being a transgender transchild. Meanwhile, the organization completely ignored his violent nature and manipulative lies. These actions by the MCC Church placed the lives of women and others at risk.

Despite the past restraining order, one his daughters tried to open communications with him. She invited him to her wedding on the condition that he dresses tastefully. She texted him, “I don’t want a commotion started or anything. I really want the focus to stay on me and David. Would that be okay?” His response was utterly despicable: he staged a suicide attempt on the day of her wedding. This man attempted to ruin his daughter’s wedding day to feed his own narcissism.

The support group project came to an end when Stefonknee exposed himself for the kind of person he really is. His youngest daughter messaged him on Father’s Day in an attempt to reach out: “Please text me if you want to, but I’m not ready for a call. Happy Father’s Day.” His response? “I’m going to kill myself. Bye.” He described this abusive behaviour to his support group who was horrified at what he’d done. He made himself out to be the victim when displaying this by saying, “I literally was ready to slit my throat”.

From then on he became involved with FetLife, a sexual fetish website. He became connected with a couple in Peterborough, Ontario who have played into his (I’m guessing) psychosis. They allow him to role play as a six-year-old girl being raped. This is the fantasy he wants to carry out. They allow him to live out his life as a child. In an interview he graphically described living out his fantasy of being raped as a six year old.

“I felt like a woman!” reports Stefonknee of his “adopted dad’s” penis inserted man-on-man into his “six year old girl” rectum at the Oasis swingers club. “I was surprised I didn’t think I was going to be pregnant, I was so much a girl. I actually have an erection right now from it so I’m just going to pull my dress down a little bit,” he told the journalists who were covering his journey to girlhood.

There is much worse in the interview, however, it is far too graphic to repeat here.

The journalists who conducted this interview say, “Steffy is in a place of peace with her identities after a very traumatic falling out with her family, which for trans folks, is unfortunately not uncommon.” Stefonknee is a severely mentally ill, abusive, violent, dangerous, closeted pedophile, who has shirked his responsibilities as a father. He now lives as a child, allowed to completely ignore the real world, and live in a fantasy. This person is a danger to himself and those around him.

All of this has been enabled and encouraged by identity politics, which fetishises identity over science. This is the peak of liberalism, it is the inevitable result of placing identity over science. There can be no doubt that this man has had a mental illness for a long time that has gone untreated. Instead of providing the necessary health care, he has been handed a licence to exhibit any irrational behaviour he wishes, and to indulge in any perverse fantasy. Because no one was willing to reject his identity on a serious level, and instead deal with his mental health, it has spiralled out of control into sick qusai-pedophilic relationship.

Instead of acknowledging the reality of this man as mentally disturbed and dangerous, the interviewers and thetransgenderproject.com have made him out to be a celebrity and a victim.

This is directly where First Worldist Marxists are going. They have uncritically taken on identity politics in lieu of revolutionary science to build a stand-in proletariat. No, this is not a slippery slope fallacy. This has already happened. They have already taken on mental illnesses as identities, and not as the problems they are. When this reaches out to identity politics at large, it explains some other unethical behaviour First Worldists engage in.

Some groups go to the point of falsely claiming to be a part of oppressed groups in order to try and reach them. These same people use the plights and problems of oppressed people’s in order to make themselves out to be victims. A good example of this is “gender queer”. There are many White, upper middle class men who call themselves this to deny their membership in, and responsibility for abolishing patriarchy. Once one of these men “identifies” as “gender queer”, they can no longer be called out for their sexist behaviour which is entirely patriarchal. They use this definition to deny the White male privilege they have, and actively use. Nothing is more dishonest than to use an oppressed group to deny your own privileged place in the hierarchy of society. I can think of one organization whose leader suddenly discovered they were “trans” once their group was called out for its repeated male chauvinism. Now they claim their group can’t be sexist, because they’re supposedly “trans” now.

What’s wrong with identity politics? The fact it doesn’t lead to revolution. As First Worldists champion identity, they reach for reforms, not revolution. There is no effort to rally the masses to carrying out the overthrow of the U.S. government and its oppressive class structure. The identity politics people they champion are not interested in revolution, they want reforms. No one is saying that the disadvantaged should not be helped. We are saying that the goal of revolution and the path to achieving it has been abandoned. Meanwhile, the First World left keeps scratching its head writing posts asking how they can get back on track.

This is what First Worldism has degenerated into.

Edit: Recently, “Stefonknee” went missing. The Toronto police put out a message informing the public of his disappearance. A few days later he was found, with no explanation given for his absence. One is tempted (given his previous behaviour) to assume that he took off in order to get attention. Meanwhile, actual children are missing and require resources to investigate their disappearances. It’s disgusting to be giving his absence so much press while there are hundreds of missing First Nations women who have gone completely ignored.

The self-serving nature of “Stefonknee” makes itself plain to see. Browsing his twitter account, anytime someone criticizes him on his child fetish, he calls it “transphobic.” Essentially, he’s using the oppression of transgender people as body armour against rightful criticism and condemnation.

During the interview he even called himself a boy when asked if he was a boy or a girl. In addition, he makes male chauvinist attacks on women. 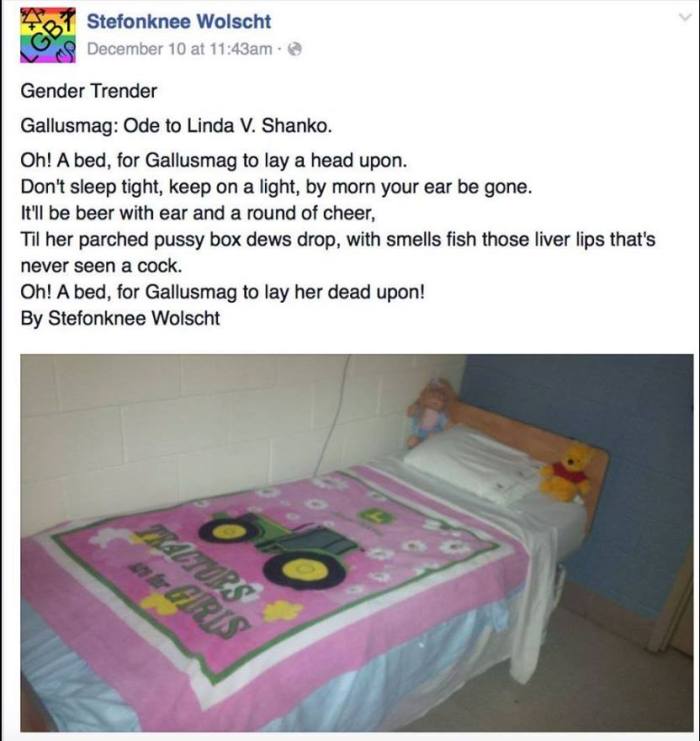 17 thoughts on “Stefonknee as a Symbol of Identity Politics”