Turkey has declared war on Kurdish forces inside Syria. The military has rolled in against Kurdish fighters in Afrin city. Turkey has claimed upwards of 260 Kurdish and ISIS fighters have been killed in their attacks. The attack is being called ‘Operation Olive branch’, which the Turkish government says is going successfully. On the other side, Turkey has said that 3 of their soldiers have been killed. Turkish Foreign Minister Mevlut Cavusoglu announced that the operation in Afrin may extend into the town of Manbij and possibly areas east of the Euphrates River. [1]

Concerns of the Turkish government are over the strategic positioning of Kurdish forces and how they’ll affect them. As it is, the Kurdistan Workers’ Party (PKK) is already attacking them. If an autonomous region of Kurdistan is created, Turkey can most certainly look forward to increased attacks by these forces. The US has already announced the creation of a 30,000 member “Border Security Force” along the border between Syria and Turkey, as well as Iraqi border to the southeast and along the Euphrates River Valley. It will be made up of the Syrian Democratic Forces (SDF) – an alliance of militias in northern and eastern Syria dominated by the Kurdish Peoples Protection Units (YPG). [2] It is obvious to most political players that the Kurds will indeed launch greater attacks upon Turkey if this region and army are allowed to be formed. Turkey claims that it is acting in “self-defence”. [3]

Since the attack was launched the Kurds have sent forces to defend the territory. However, the US is not in approval of such measures. The Pentagon has made it clear to the Kurds that they’ll withdraw support for the YPG fighters in the SDF if they move to assist the Afrin pocket. [4]

The US has made it clear to the Kurds that their role is to fight off ISIS for them. The Kurdish militias are far from being a force that the US genuinely care about. The only use they have is to protect the captured oil fields. This can be demonstrated quite clearly by looking at where the US is placing the Kurdish autonomous region. Not in the centre where the majority of the Kurdish population lives, but in the East where the oil reserves are. Those same fields are found on the border with Iraq, where the US placed Iraqi Kurdish territory. [5] It is obvious to any honest eye that the Kurds are nothing more than puppets for US foreign policy and energy politics. 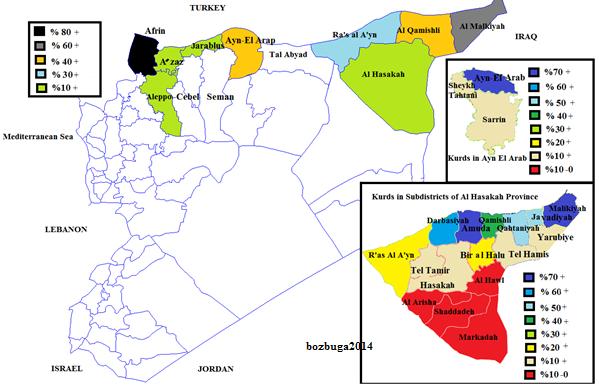 The US has attempted to pull together forces and allies from different positions to carry out the war on Syria for them. This is one of the difficulties of a proxy war, you never really have 100% control over how the different sides will interact with each other. There is great hostility among the different groups that will lead to conflicts. The US seems disinterested in helping the Kurdish forces in African because the territory is of no use to them. They want the Kurds to fight for and protect the oil-rich areas for them. The Kurds and their relationship with the US are far from altruistic. The US is after the oil regardless of consequences to others, and the Kurds want their own territory even if it means supporting imperialism which caused the conflict in the first place.

Today’s Marxists have given uncritical to those Kurdish forces. They see only the stars on banners, lofty words with no substance, and let us not forget the use of attractive women (following white colonialist standards) in propaganda photos. This pro-imperialist stance with the US simply cannot be ignored if one is, to be honest about the situation. To side with the Kurds is to side with US imperialism.