Once again we are inundated with Israel’s lies that are used to justify the invasion of a sovereign Arab country. Once again the Israeli Prime Minister, Benjamin Netanyahu, has taken to the public with dire warnings about an alleged nuclear weapons program that is secretly underway in Iran. To those who witnessed the event, they saw a very stern PowerPoint presentation that supplied tons of information. Netanyahu, with the grace of polished public speaker, warned of a coming nuclear apocalypse if Iran was not invaded and destroyed immediately.

If this song-and-dance seems familiar to you, it should. Netanyahu pulled this once before back in 2012 before the United Nations. That time he had a single picture, a cartoon representation of a bomb which he combined with a red marker to show “how close” Iran was to allegedly developing weapons-grade uranium. His claim was that they were only a “few months” away from being able to build a nuclear missile. Funny enough, he made the same claim back in 2009 under then Iranian leader President Mahmoud Amenajad. 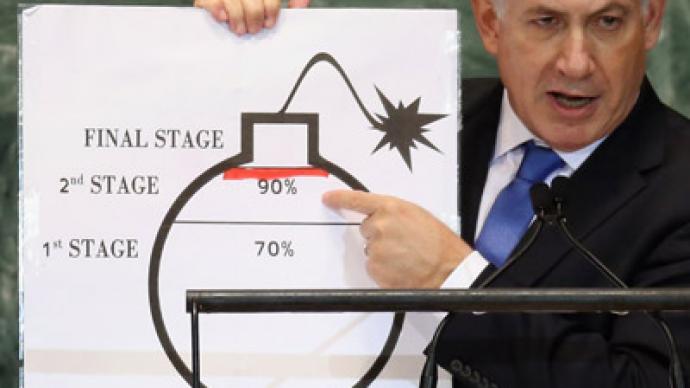 These “few months” are increasingly stretching out over the course of several years.

This time on stage he claimed to have copies of an entire library of Iranian plans to build Weapons of Mass Destruction. The whole library was dramatically revealed by pulling away a black cloth covering it. The whole display seemed very much like a magician’s touch. He claimed the files had been moved to a secret location during the previous year. He claims that “after signing the nuclear deal in 2015 Iran intensified its efforts to hide its secret nuclear files.” Like Alex Jones, it seems, he has the documents.

According to Netanyahu, Iran has planned to produce five warheads with a ten-kiloton TNT yield for use with missiles. To add a frightening flair to it, he added that it was “like five Hiroshima bombs to be put on ballistic missiles.” Evidently, Netanyahu has a taste for exaggeration. His display was said to contain a “half a ton” of Iranian nuclear know-how, totalling 55,000 pages and another 55,000 files on 183 CDs.

Many in the media are rightfully calling Netanyahu “the boy-who-cried-wolf.”

It is no coincidence that this alleged proof of a nuclear weapons program comes right as US President Donald Trump has expressed his desire to pull the US from the Joint Comprehensive Plan of Action (JCPOA) in which Iran has promised not to develop any nuclear weapons in exchange for an easing of sanctions.

Trump has a three-fold reason for wanting to abolish the agreement and creating another one. Firstly, it was his dreaded predecessor Barack Obama who brokered the agreement. Trump has been quite petty in trying to undo everything Obama did while in office. Secondly, the sanctions against Iran have not been as harmful as the US had hoped they would. Iran has managed to do fairly well, economically, in the face of the sanctions. Iran’s economic growth during 2017 was quite strong.

The goal of the US and Israel has been either the destruction of Iran or to have it completely under their control. Iran has been a stalwart defender of anti-imperialism which has made things difficult for the two powers which seek total control over the energy resources and financial systems of the Middle East. For them, a new deal with Iran must be made in order to try and harm them, to weaken them further.

The third reason the US wants to end the JCPOA agreement is the advancement of Iran’s military capabilities. Currently, their ballistic missile program is advancing much more quickly than the US and Israel had anticipated. These missiles are not contingent upon the existing agreement. The US, no doubt, wishes to add curbing their missile program as well. The ability of Iran to have any kind of deterrent against invasion is something the US would like to avoid.

Iran, however, is adamant about not wanting to cancel the agreement. They have lived up to their end of the deal which has been certified time and again by the European powers which have also been a part of the deal. Becuase they’ve done nothing wrong, they see no need to re-write the agreement. They know very well that the US is going to add in new demands on them that will hinder their military development in the non-nuclear sector – specifically ballistic missile development.

However, there isn’t a universal consensus on the matter. The other countries involved in the agreement want the deal to stay in place, the European powers in particular. Why? Becuase when the US began the talk of cancelling the agreement, Iran ended using the US dollar for trade. Instead, they picked up the Euro. So, while the US wants to punish them for dropping the dollar for trade, the Europeans don’t feel the same way. This move by Iran shifts a portion of power away from the US petrodollar towards the Euro.

Some have speculated that this was a two-headed move: drop the US dollar in response to US aggression, and shore up support from the European contingent of the JCPOA. This way the US demands that would hurt Iran are undercut (somewhat) by support from the Europeans involved in the deal. This not only created a divide among those who wish to keep nuclear weapons out of the hands of Iran, but it also creates a kind of defence against US demands to alter the deal.

This is all just a part of the manipulations by the US and Israel to justify abandoning the agreement they signed on to because it doesn’t hurt Iran as much as they wanted.