We have to keep in mind that, generally speaking, both the North and the South have the same short-term goals in dealing with the US.

Short term, an elimination of the sanctions on the North. Once they have been removed the DPRK can develop economically to a much greater degree than ever before. We have already seen how far the DPRK can develop without the freedom to be able to trade with whomever they wish. US sanctions on them have been worse than possibly anything any country has ever faced. No other country in the world could possibly have survived in the face of the economic horror that has been inflicted upon them. Cutting off such trade, and continually preventing it would practically destroy the US or anyone else overnight. A cessation of US and UN sanctions against the country would allow the DPRK to skyrocket in trade and development. Their very tightly controlled and directed system has proven to withstand the test of time and sabotage. Giving that type of freedom (it rightfully deserves) would achieve great things.

The South is also very interested increasing their economic relationship with the North as well. I think it no coincidence that one of the first agreements they made was to build a highway and a bridge between the two countries. This was first and foremost the construction of infrastructure for trade. Many will claim it as a symbolic gesture of unity, but I think there’s a much more pragmatic reason for it.

Machinery and textiles have been the main DPRK export to the South. From the data provided, we can see that minerals used to play some role but have since been diminished by sanctions. In fact, this seems to be what the world is interested in most, getting their hands on, as well as the DPRK in selling. It has been estimated that upwards of $6 trillion of rare Earth minerals (REM) are contained within the mountains of the DPRK. That kind of wealth is just waiting to be exploited.

Yet, interestingly, we can see that machinery and textiles are also the biggest exports from the South into the North. This may seem like a contradiction of sorts that they’re both exporting the same thing to each other, but it’s not. There’s a term in economics: comparative advantage, the “economic law referring to the ability of any given economic actor to produce goods and services at a lower opportunity cost than other economic actors.” 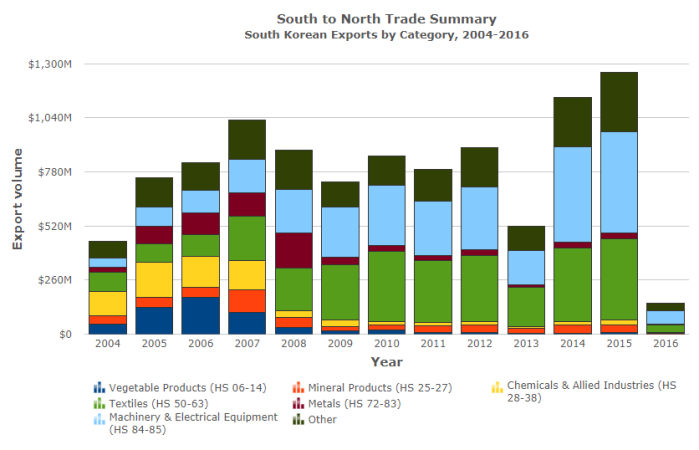 The desire to trade and the proven beneficial nature of the trade is already proven. What the South and the North want is an end to the sanctions so that they may pursue that economic relationship. It will greatly benefit both of them. That trade has been held back primarily by the desire of the US to force a “regime change” by trying to cause the country to collapse economically. These efforts, have categorically failed. The South (and its population) seem more interested in a mutually beneficial trade relationship than further hostilities.

The Long-term goals of the two countries are different. Here they have different objectives: The North wants to reunify the country under the banner of the North. Meanwhile, the South merely wants to carry out a confederation that would eventually merge the two Koreas together over a long period of economic cooperation. One eventually wants to overtake the other but in different ways. The South wants to have a confederation where the DPRK becomes one big Special Economic Zone within its own borders. We can see that to a degree now within the European Union. Even with the Union with the same currency, we can see that there are significant wage differentials among the various countries.

The distribution of gross full-time equivalent wages in PPS within the EU in 2011 (Source: EU-SILC)

Wage laws can be used to dictate two wholly different levels of wealth for (primarily) working class people between the two Koreas. The South wants this kind of relationship with the North, the political ability to keep them as a source of exploitable labour and resources all their own. The economic strength of the South will eventually overwhelm them, and they’ll be relegated to a kind of second-class Koreans.

At the same time, the South will be able to wield its power in the confederation to fully control the REM. This places a great deal of potential wealth in the hands of the South Korean elite mining companies, who most likely, will be taking over the development of the DPRK mining industry. Having access to such long-awaited, and valuable REM will be a tremendous benefit for the South politically. As the world will want in on these cheaper REMs, they’ll be forced to deal with the South-dominated confederation politically. They’ll wield a growing political power in the world. If the world wants in on those minerals, they’ll have to deal with the interests of the confederation. That political power will increase the confederation’s standing in the world and increase their ability to make demands of other countries and economies.

It also changes the power dynamic between them and the US. For decades the US has wholly owned the South as a puppet state. This new acquisition of REM will give them a good deal of leverage. The US will, to some degree, be forced to abide by their terms. What alternative do they have? It’s not politically viable to simply attack the confederation, it would be politically impossible given the official end of the Korean War and the peaceful reunification of the peninsula. It will be wholly unpalatable to the international community and to the Korean people themselves. This will be seen for what it is, a bald-faced threat from the empire, with no boogeyman of the DPRK to hide behind.

With the efforts of the DPRK, the confederation could go quite differently. Pulling the DPRK into such a confederation would give it some degree of political power. It’s very likely that the DPRK would have some kind of council, made up of South Koreans as well, with an equal amount of voting power. Any kind of voting block would have at least one pro-DPRK delegate. We certainly can’t expect a President Kin Jong Un as leader of the peninsula, but we can expect a good deal of political power wielded by the DPRK. Such influence is bound to affect the confederation council’s decisions on all manner of inter-Korean activities.

Regardless of what form it takes, it will give a democratic power to the DPRK over inter-Korean policies. This allows an advancement of DPRK interests no matter how you slice it. They wield no such power over South Korean policy right now. The advent of such a council will give the DPRK the ability to influence the South’s policies. I think this is more significant than people think. The DPRK has been staunchly anti-imperialist, they’ll not trust anything the South does that forwards US interests. This would force the South to move away from pro-US policies. They’ll have to be more pro-DPRK in order for the confederation council to work. They’ll at least have to meet the DPRK halfway on matters. This will force the South to follow a more DPRK oriented political line. Given enough political pressure, this could allow the DPRK elite to weird significant power in the South.

Now, this isn’t as farfetched as it sounds. The DPRK can increase its political power in the South. I already predicted a shift in the South’s policy towards anti-DPRK activities. Such has already taken place. Only a few days ago an anti-DPRK rally was shut down by police in the city of Paju because it threatened the prospects of Reunification. They wanted to carry out their old nonsense with the balloons transporting various subversive materials into the North. Such a sight has never been seen before, the government actively squashing an anti-DPRK activity. This goes along with what I was saying before about legalizing pro-DPRK sentiment in the country. It’s not possible to have an inter-Korean council without being able to speak in support of the DPRK. This will allow those who are supportive of the North to begin speaking openly.

Already Kim Jong Un has a massively increased popularity among South Koreans for his efforts toward peace and unification. As of May 2nd, he has an approval rating of 80% in the South. With this kind of popularity, the North is bound to wield some kind of political influence. The boogeyman status of the North has seemingly faded in the face of genuine peace efforts. The pro-north and anti-imperialist sentiment are going to be much more open to citizens of the South. Such a stance will definitely lead to the creation of a pro-North political party in the South. No doubt it would be small compared to the entrenched powers, but it would hold some seats in the South’s National Assembly. This is another front where the North’s influence can be wielded.

I see little doubt in there being an explosion in pro-north policies in the South. The DPRK will begin to wield some, if not, a large influence in South Korean politics. This goes very well for the DPRK and will be of great benefit to it. On top of this, we could see the pro-DPRK party playing a supporting role in some kind of political coalition, somewhat like we see with the Democratic Unionist Party in the United Kingdom. From that standpoint, we could see an encroaching growth in DPRK political power which could theatrically overtake the South slowly. Over time the South’s policy and public opinion would slowly move towards the orientation of the North.

How this all plays out we’ll have to wait and see, but I think these two scenarios I’ve presented here are solid.