It seems the White Helmets have outlived their usefulness, at least as far as the US is concerned. The White Helmets are best known for their alleged emergency services work in the war-torn country of Syria. The group claims that they’re there to help save lives of those affected by the war by providing ambulatory services. In reality, their so-called charity work is quite different. They, in fact, have a two-fold alternate agenda.

Firstly, they work as a first aid team for Al-Quaeda forces in Syria. The White Helmets spend a lot of time around the Al-Nusera Front which is a subsidiary of the notorious terrorist group which are claimed to be responsible for the terrorist attack on the US on September 11th, 2001. Countless photos have come out of White Helmets rushing to the aid of Al-Quaeda fighters in the country. Even US Senator John McCain has been photographed collaborating with them.

Secondly, their purpose is to produce propaganda videos slandering the government of Bashar Al-Assad. More than once the group has mysteriously been in the area for alleged chemical attacks against the population. Gruesome photos have been distributed on social media allegedly showing victims of gas attacks. In other instances, they’ve been caught outright faking rescue operations for their own cameras. They’re not terribly bright, they took photos of themselves afterwards celebrating their fakery. 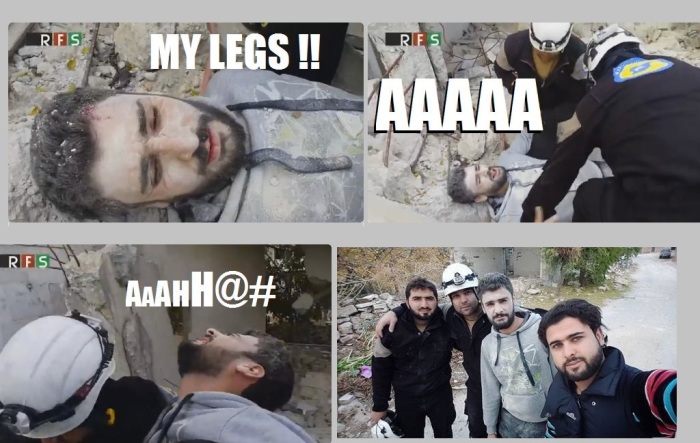 Well, it seems despite their ‘charity’ work the US has decided to stop funding them. The US State Department has announced that funding for the group is “under active review.” This is serious as the US comprises a third of their funding. This comes after the US made a pledge to them a few months ago to help fund them into 2020.

“Our meetings in March were very positive. There were even remarks from senior officials about long-term commitments even into 2020. There were no suggestions whatsoever about stopping support,” Raed Saleh, the group’s leader, told CBS News.

Why the sudden change in plans? It appears that the recent faked Duma chemical attack may have had something to do with it. On April 7th it is claimed that the Syrian government carried out a chlorine attack against the population of Duma, seemingly, without any real reason for doing so. The Western imperialist countries shouted outrage at the event, while experts cast doubt upon the event.

The problem with the official story is that there really is no viable reason for the Assad government to carry out the attack. It was only days before they recaptured the city. The terrorist forces had already agreed to surrender and had already been evacuated. The White Helmets were once again mysteriously there to film the aftermath, not the event itself. People who were seen in videos affected by the attack have gone to the OCPW and testified that they were suffering from smoke inhalation, not chlorine gas. Day-by-day the official US-backed story about the Duma attack is falling apart.

In light of this recent massive propaganda failure, it seems that the US is now distancing itself from the group in an effort to save face. The credibility of the group is already damaged beyond repair. Their usefulness as a propaganda operation has run out. The world now knows that the White Helmets have been faking chemical attacks and rescues, and now the US is seeking to distance themselves from it, despite the fact they were a key part of the group’s operation.